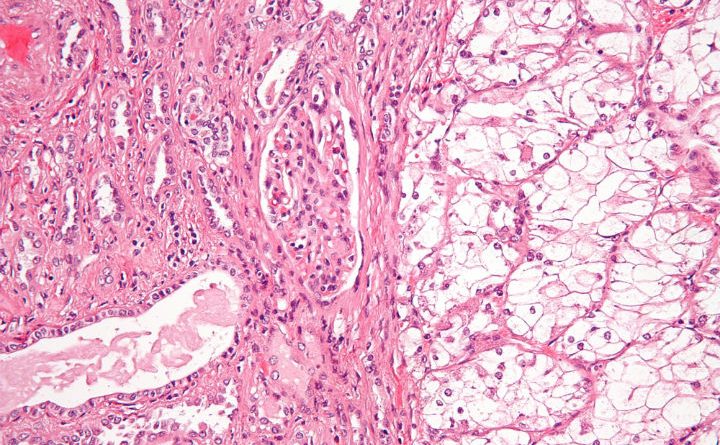 Renal cell carcinoma makes up approximately nine out of ten kidney cancer cases in adults. This type of kidney cancer originates in the lining of the proximal convoluted tubule, which is part of the small tubes in the kidney that transport waste from the blood to the urine. The symptoms of this disease are typically very hard to recognize, which explains why the cancer has often already spread by the time it is diagnosed.

Most patients don’t start showing symptoms for renal cell carcinoma until the later stages of the disease when a tumor has grown larger. Therefore, most of the time this disease is diagnosed when a patient is being examined for another reason. There are some subtle symptoms that you can watch for, though. These can include a variety of signs, ranging from minor ailments like running a fever or experiencing loss of appetite, to more serious afflictions such as constant, intense pain in the back or abdomen or drastic weight loss for no apparent reason.

The most common symptom for renal cell carcinoma is hematuria, or blood in the urine, occurring in about 40% of patients. This can range from enough blood to give your urine a pink tint, to microscopic amounts that can only be detected by performing certain tests. If the tumor has grown to a significant size, it will cause a pain that is steady and originates to the side of your lower back, just under your rib cage. This kind of pain will be different than the kind produced by a strained muscle since it does not change with movement.

Another symptom produced by a fairly large tumor in your kidney is a noticeable lump extending outward and located on your abdomen, either on your back, under your rib cage, or on your side. This is obviously an indication to seek medical attention immediately.

Sudden, unexplained weight loss could be an indication of renal cell carcinoma. Cancer cells in the kidney can steal nutrients from your healthy cells, which will lead to unintentional weight loss. If you are not dieting, and especially if your weight loss accompanies any of the other aforementioned symptoms, this is a good reason to call your doctor.

Less common symptoms might include: night sweats, high blood pressure, flank pain, anemia, sudden vision problems, fatigue, unusual hair growth in women, pale skin, and for men, swelling of the veins around one or both testicles.

Symptoms of kidney tumors can be very similar to other conditions, such as bladder infections or kidney stones. If you experience any of these symptoms, especially in conjunction with one another, you should call your doctor as soon as possible.

The key to treating renal cell carcinoma effectively is catching it as early as possible. The 5-year survival rate for this disease can be as high as 90%, but this depends heavily on whether the cancer has metastasized to any other organs by the time it is diagnosed. Since other common forms of cancer treatments, such as chemotherapy and radiation treatment, don’t typically work for kidney cancer, the best option for recovery is surgery to remove the tumor. If the cancer has spread to other organs like the lungs or the lymph nodes, it becomes much more difficult to remove, causing the survival rate to become significantly lower.